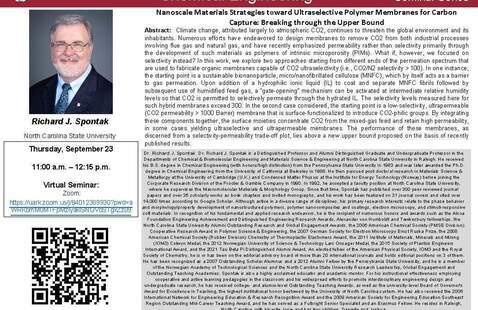 Climate change, attributed largely to atmospheric CO2, continues to threaten the global environment and its inhabitants. Numerous efforts have endeavored to design membranes to remove CO2 from both industrial processes involving flue gas and natural gas, and have recently emphasized permeability rather than selectivity primarily through the development of such materials as polymers of intrinsic microporosity (PIMs). What if, however, we focused on selectivity instead? In this work, we explore two approaches starting from different ends of the permeation spectrum that are used to fabricate organic membranes capable of CO2 ultraselectivity (i.e., CO2/N2 selectivity > 100). In one instance, the starting point is a sustainable bionanoparticle, micro/nanofibrillated cellulose (MNFC), which by itself acts as a barrier to gas permeation. Upon addition of a hydrophilic ionic liquid (IL) to coat and separate MNFC fibrils followed by subsequent use of humidified feed gas, a “gate-opening” mechanism can be activated at intermediate relative humidity levels so that CO2 is permitted to selectively permeate through the hydrated IL. The selectivity levels measured here for such hybrid membranes exceed 300. In the second case considered, the starting point is a low-selectivity, ultrapermeable (CO2 permeability > 1000 Barrer) membrane that is surface-functionalized to introduce CO2-philic groups. By integrating these components together, the surface moieties concentrate CO2 from the mixed-gas feed and retain high permeability, in some cases yielding ultraselective and ultrapermeable membranes. The performance of these membranes, as discerned from a selectivity-permeability trade-off plot, lies above a new upper bound proposed on the basis of recently published results.

Dr. Richard J. Spontak is a Distinguished Professor and Alumni Distinguished Graduate and Undergraduate Professor in the Departments of Chemical & Biomolecular Engineering and Materials Science & Engineering at North Carolina State University in Raleigh. He received his B.S. degree in Chemical Engineering (with honors/high distinction) from the Pennsylvania State University in 1983 and was later awarded the Ph.D. degree in Chemical Engineering from the University of California at Berkeley in 1988. He then pursued post-doctoral research in Materials Science & Metallurgy at the University of Cambridge (U.K.) and Condensed Matter Physics at the Institute for Energy Technology (Norway) before joining the Corporate Research Division of the Procter & Gamble Company in 1990. In 1992, he accepted a faculty position at North Carolina State University, where he supervises the Macromolecular Materials & Morphology Group. Since that time, Spontak has published over 300 peer-reviewed journal papers and over 35 scholarly works as book chapters and invited monographs, and his work has been featured on 31 journal covers and cited over 14,000 times according to Google Scholar. Although active in a diverse range of disciplines, his primary research interests relate to the phase behavior and morphology/property development of nanostructured polymers, polymer nanocomposites and coatings, electron microscopy, and stimuli-responsive soft materials. In recognition of his fundamental and applied research endeavors, he is the recipient of numerous honors and awards such as the Alcoa Foundation Engineering Achievement and Distinguished Engineering Research Awards, Alexander von Humboldt and Tewkesbury fellowships, the North Carolina State University Alumni Outstanding Research and Global Engagement Awards, the 2006 American Chemical Society (PMSE Division) Cooperative Research Award in Polymer Science & Engineering, the 2007 German Society for Electron Microscopy Ernst Ruska Prize, the 2008 American Chemical Society (Rubber Division) Chemistry of Thermoplastic Elastomers Award, the 2011 Institute of Materials, Minerals and Mining (IOM3) Colwyn Medal, the 2012 Norwegian University of Science & Technology Lars Onsager Medal, the 2015 Society of Plastics Engineers International Award, and the 2021 Tau Beta Pi Distinguished Alumni Award. An elected fellow of the American Physical Society, IOM3 and the Royal Society of Chemistry, he is or has been on the editorial advisory board of more than 20 international journals and holds editorial positions on 3 of them. He has been recognized as a 2007 Outstanding Scholar Alumnus and a 2012 Alumni Fellow by the Pennsylvania State University, and he is a member of the Norwegian Academy of Technological Sciences and the North Carolina State University Research Leadership, Global Engagement and Outstanding Teaching Academies. Spontak is also a highly acclaimed educator and academic mentor. For his instructional effectiveness employing cooperative and active learning pedagogies in the classroom and his widespread efforts to promote interdisciplinary engineering design and undergraduate research, he has received college- and alumni-level Outstanding Teaching Awards, as well as the university-level Board of Governor's Award for Excellence in Teaching, the highest institutional honor bestowed by the University of North Carolina system. He has also received the 2006 International Network for Engineering Education & Research Recognition Award and the 2009 American Society for Engineering Education Southeast Region Outstanding Mid-Career Teaching Award, and he has served as a Fulbright Senior Specialist and an Erasmus Fellow. He resides in Raleigh, North Carolina, with his wife Josie and has two children, Danielle and Joshua.