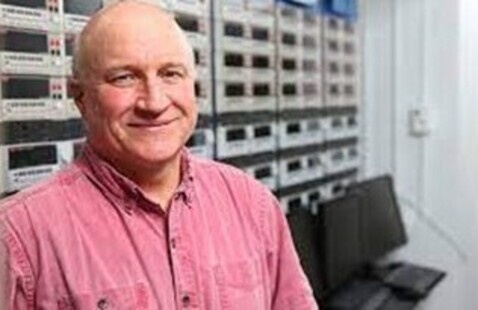 (MEEG) Mechanical Engineering, 217
Add to calendar
Save to Google Calendar Save to iCal Save to Outlook

Electrochemical Society (ECS) invites you to attend a Meet & Greet and Seminar with Prof. Jeff Dahn (Dalhousie University), the person behind Tesla’s battery technology on Tuesday, April 19th at 1:45 pm (talk starting at 2 pm) in MEEG 217 or join us on Zoom (Meeting ID: 851 9173 1347 Passcode: Dahn-ECS1). Food and drinks will be provided.

More than one million miles and a century of life "Lithium-ion battery production is exploding around the world due to mass adoption of electric vehicles.  But, in 2030, it is projected that over 90% of Li-ion batteries produced will be used in vehicles.  What then will we use to store electrical energy from solar and wind installations since they are variable?   All the batteries are in vehicles.  This is where “vehicle-to-grid (V2G)” comes in: vehicles are tethered to the grid when parked and can store or deliver energy as required.  For V2G operation, batteries with lifetimes of decades and over 10,000 charge-discharge cycles are required.  Dr. Jeff Dahn will explain how lithium-ion batteries with such incredible lifetime can be made."

Biography. Prof. Dahn has worked on lithium and lithium-ion batteries for 43 years. In 2016, Dahn began a 5-year partnership with Tesla which has been extended till 2026.  Dahn is the co-author of over 750 refereed journal papers and 73 inventions with patents issued or filed. Dahn has received National and International awards e.g., Battery Division Research Award (The Electrochemical Society - 1996); Gerhard Herzberg Gold Medal in Science and Engineering (Canada’s top science award. https://www.dal.ca/diff/dahn.html

This event is supported by the Student Activities Fee as a funded event by the Associated Student Government and is free to all currently-enrolled University of Arkansas, Fayetteville, students who pay the student activities fee. For questions about the event or for accommodations due to disability please contact Aida Sheibani, asheiban@uark.edu, (479-966-6002).