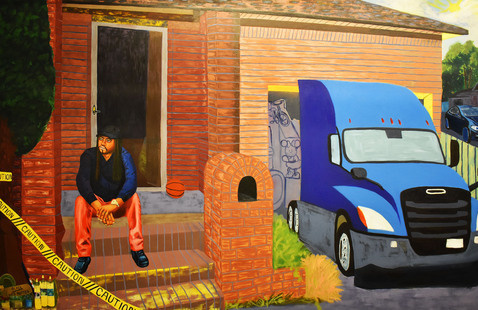 All are invited to experience M.F.A. Thesis Exhibition, 'Invisible Until' at the Fine Arts Center Gallery, April 15 -April 23, by Markeith Woods. A closing reception will be on April 22 from 6-8 p.m. that is free and open to the public.

Invisible Until is a body of paintings reflecting on Woods’s personal story of growing up in Pine Bluff, Arkansas and the life events that shaped his ideas of progress and success.

Recalling his experiences from his undergraduate education at the University of Arkansas at Pine Bluff and beyond, Woods depicts the psychological state of living as a Black male in the United States. He asserts his own understanding of the grim realities of existing in a country which professes opportunity but operates political, economic and social systems which divide, separate, and force many, particularly black males, into a lifetime of survival.

Viewing life through a somewhat similar prism as Ralph Ellison’s main character in the literary classic, The Invisible Man, Woods visually chronicles the feelings of isolation, loneliness, desolation, and confusion which come in a society which lauds multiple pathways to “progress,” though these pathways often turn out to be dead ends. And even after accomplishing goals such as graduating from college and enrolling in graduate school, Woods is still forced to contend with a degree of invisibility which defines a deep part of his inner being a dynamic that he also sees in many of his childhood friends struggling in life.

With a powerful sense of urgency, Woods invites the viewer to go deeper into the act of examining and criticizing institutions which help perpetuate individual invisibility. He beckons them to investigate the systems that were systematically built to dismantle consciousness and purpose in black men, thereby dismantling their communities. Woods uses riveting conversations between his black high school classmates from Pine Bluff with similar experiences as a basis to parlay images, poses, objects, environments, and emotions that illustrate a layered range of complex perceptions.