OLLI: Taiwan - On the Edge 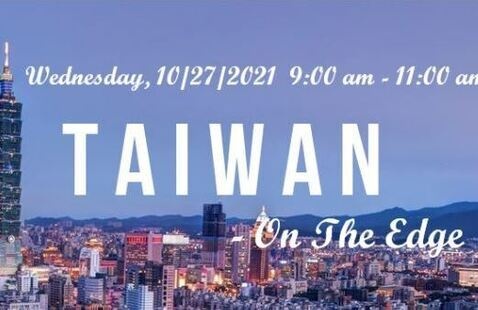 Is Taiwan part of China? Or is Taiwan separate and sovereign? Both states have pursued policies of deliberate ambiguity on these questions for decades. So far, this approach has been good for world peace - but things are heating up. The Taiwanese sit on an unstable frontier. They count their country in the liberal body of nations. Across a narrow strait, authoritarian China plans to ultimately absorb Taiwan. Despite Taiwan’s resolve to resist China, its continued independence actually rests on the commitment of its U.S.- led allies to provide arms to the island and defend it from a Chinese attack. As free nations and authoritarian states increasingly jostle one another for influence and standing, a simple misstep in the strait or somewhere else on the globe could place Taiwan’s security - and world order - at risk. How are the Taiwan people and their leaders dealing with these challenges? Do Taiwan’s allies have the wisdom and will needed to keep the general peace? Can the Chinese Communist Party continue to leave the issue of Taiwan open and still maintain legitimacy in the eyes of the Chinese people? In this single session class, Ken Allen, former Chief Financial Officer of Texas Industries, Inc., seeks to identify the hazards associated with this “narrow” issue in order to give participants a better understanding of current events.