OLLI: The Forgotten War: Korea and the Modern World 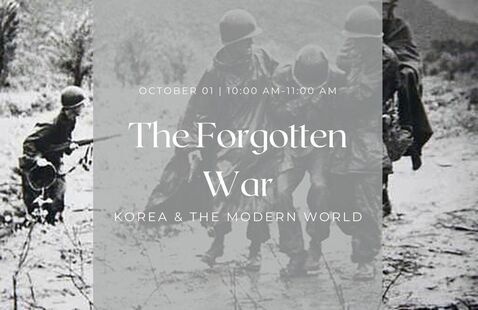 The Korean Peninsula lies at the crossroads of empires. By 1950, it found itself along a major Cold War fault line as well. Hostilities there produced global fears of an incipient third world war, ravaged Korean society -- some three million Koreans died, and committed America to containing communism in Asia. The 1953 Armistice ended the heavy fighting but left Korea divided. Two vastly different societies and economies would develop, in many ways mirroring the communist/capitalist schism that emerged in the late 20th century. Though it became the “Forgotten War,” the conflict and its presumed lessons shaped how U.S. leaders handled events in Vietnam and elsewhere. In short, David Prentice, who holds a Ph.D. in the history of U.S. foreign relations, will examine the Korean War, its legacies and its impact on America and the modern world. *Note: This is a blended course. Each week, participants will receive a video lecture to watch on their own time ahead of the next week’s live Q&A session. For example, the first video will be sent 9/24, to be watched before the live Q&A on 10/1.

Link to the course will be sent to registrants before the first session.