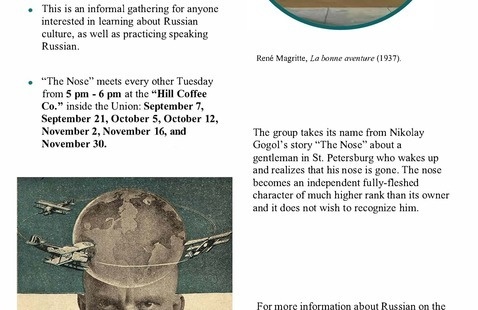 Russian Conversation Table entitled "The Nose" is an informal gathering for anyone interested in learning about Russian culture, as well as practicing speaking Russian.

“The Nose” will meet every other Tuesday from 5 pm – 6 pm inside the Union at the Hill Coffee on these dates:

The group takes its name from Nikolay Gogol’s story “The Nose” about a gentleman in St. Petersburg who wakes up and realizes that his nose is gone. The nose becomes an independent fully-fleshed character of much higher rank than its owner and it does not wish to recognize him.

For more information about Russian on the U of A campus follow this link: